Well, where to begin.............I guess the best place is the time I had the privilege to guide a good lad from the Old Country, Kevin.  Kevin was visiting from Georgia and part of a very large group of clients that fish with me at least twice a year.  These guys are all beer and alcohol distributors in Atlanta; you can just imagine the debauchery that goes on while they are here!  I had the pleasure of guiding Kevin on the second day of the trip.  I mention this only because the night before we both drank like the true Irishmen we are.  It is not often that I get to tip a few, and a few more, back with someone from the Old Country so I took full advantage of the situation.  Needless to say, when I picked up the boys up in the morning, there were a few cobwebs in all our heads.  Anyway, Kevin is brand new to fly fishing and he was having the common problem of using his wrist to cast.  When a person tries to use their wrist to cast, they end up bringing the rod way too far back on the back cast and they cannot shoot the line.  It got so bad, that I had to shackle Kevin to the fly rod by using a bandanna.  Now I hate to shackle any Irishmen, but doing it to one that is directly from the Old Country seemed like a mortal sin.  However, it was the only way to get him casting correctly and it worked great.  About 3/4 of the way through the float, I decided to ta 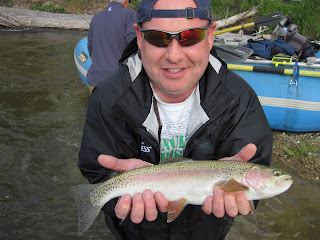 ke a very small side channel that I knew had some good fish.  I let Kevin out of the boat and told him to fish a line where two currents converged.  Before you know it, the silence of the wilderness was broken by "Oh shit, oh shit!"  I looked over and saw Kevin's rod completely doubled over by a solid fish.  I told Kevin that we had to cross the small channel to land the fish. There was simply no way we were going to land it in our current position.  During the battle,  Kevin's heart beating so hard, I swear I could see it coming out of his chest! We gingerly waded across and after a few tense moments we had a beautiful 18.5 inch rainbow in the net.  This is the way we cure hangovers in Montana.  After the adrenaline subsided, I believe there was a small flask of fine scotch passed around afterwards.  ERIN GO BRAH!  Here is the link of Kevin releasing his fish  http://www.youtube.com/watch?v=KwZTLYEN92o

Speaking of that particular side channel, I had another great day in it with MJ. Now, MJ was part of a large group that came to Montana via Yellow Breeches Outfitters in Boiling Springs, PA. Yellow Breeches Outfitters had organized a trip for some of their clients. The first week, they had about 7 people and the following week about 10 people staying in a house on the river. When they first arrived, I went to the house and gave a presentation on the Bitterroot River.  I tlked about what they could expect to see in the form of hatches and fish. 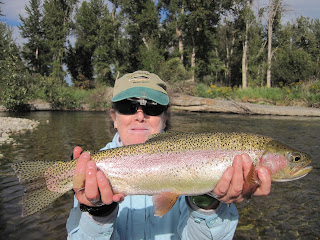 After my presentation, MJ decided she wanted to go fishing the next day. The day started off a little slow and we had some opportunities at a few fish. MJ, like most people who come to Montana to fish, was having trouble with setting the hook. When you are missing fish, it is primarily because you are setting to fast. In New Zealand the guides will tell you to say "God save the Queen" after you see the fish eat your dry fly. I tell people to count to two or say "I got you" before setting. The reason being is the fish must take the fly under water before you lift up, otherwise you will pull the fly out of the fishes mouth. After MJ found her groove, she started wailing on fish. That day, and in that channel, she landed a 17, 18, 19 and a 20 inch trout! Needless to say, it was a good day. At one point she looked at me and said, "Aces Sean, nothing but aces!" Here is a link of MJ releasing one of her fish http://www.youtube.com/watch?v=q0HLyzKgkxc


Then there was the day that I took Greg Hect fishing.  Greg had been in the Bitterroot for a few weeks but had only caught a few small fish.  I told him, like I tell everyone, I am a guide not God.  I know where the fish are but I cannot make them eat!  Greg, it just so happened, got a day where the fish were eating in a big way.  The fish were loving a properly presented Hecuba/Mahogany Dun combo.  The Hecuba is our last drake of  the year and has a green thorax and a brownish tail.  It is best imitated by a size 10 or 12 a brown or green drake.  Greg had a beautiful hook set and the one 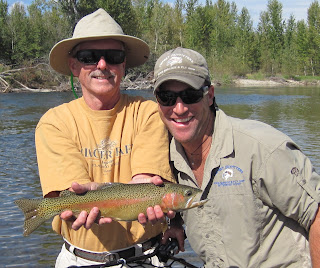 big fish that did not make it to the net, was only due to the fact that it broke him off during an explosive run.  We landed many fish that day with the best being a 17, 18, 18.5 and a 19 inch trout.  The most memorable fish was the 19 incher.  Greg was fighting the healthy cutbow for a few minutes, with his line stretched halfway across the river, when we heard a bunch of commotion on the water below us.  I looked downstream only to see a flock of about 20 mergansers taking flight and headed straight toward Greg's line.  I started yelling at the ducks, as if the could understand every word, "You damn ducks better not hit his line!"  I thought for sure at least one would collide with his line, which would cause us to lose the fish.  But being the good ducks they were, they "ducked" his line and we were able to land the fish.  Here is the link to the video of Greg fighting the fish as the mergansers took flight http://www.youtube.com/watch?v=DefXcH4GvWI and the link to him releasing it http://www.youtube.com/watch?v=jHeV5r241ps
September is now almost over and trees are starting to get their fall colors.  Some of the best fishing of the year is coming up.  Most of the time the river is pretty vacant; the kids are back in school and a lot of people are in hunting mode.  If you haven't experienced the Bitterroot River in all its fall glory, it is time to hit it!  The fish are in the better shape than anyone has ever seen them and they know winter is coming.  We are starting to see decent numbers of October caddis and mahoganies.  Even though the Hecubas are beginning to wane, there are still enough of them out to fool some nice fish.  There are still a ton of grasshoppers hitting the water and barring any major cold snap they should be around until late October.  As we push later into October look for the baetis hatches to be incredible.  As a matter of fact, I think it is time to turn of this damn computer a go do some fishing!
Posted by Osprey Outfitters Fly Shop & Guide Service at 9:02 AM No comments: