Eagles, Waxwings and Icebreakers on the Bitterroot River 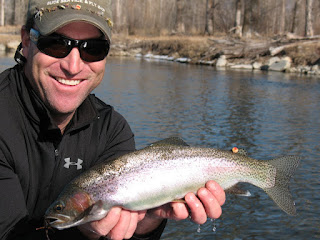 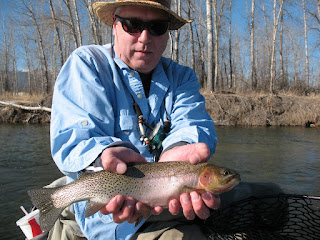 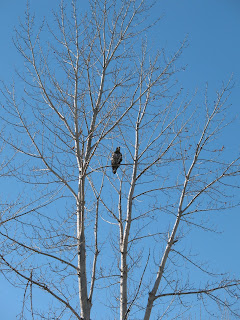 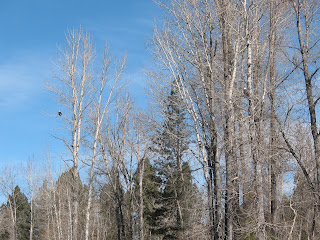 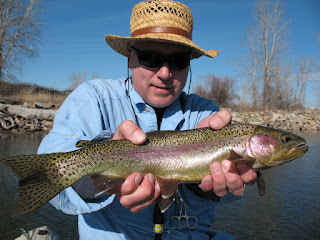 Last week I was looking at the ten-day weather forecast and decided that it was time to wake my boat up from its' long winters nap. After rolling her out (by the way her name is Bella), pumping Bella up and giving Bella a full bath and coating of 303, I got a call from a good client and friend of mine about going fishing this week. As it turned out, this would be Peter's last float on the Bitterroot River because he is moving to Belgium. After looking at the weather window it looked like Tuesday would provide some good late winter fishing. Sunny skies temps in the upper 40's would make for a good icebreaker first float of the year; little did I know that this could be taken literally.

Given the fact that flows on the Bitterroot River are super low right now, even for this time of the year, I decided to float from Woodside to Tucker Crossing. This way we would not have to cross any major diversion dams and the minor one that is in this section had allegedly been removed. After hearing this rumor I wanted to confirm it for myself. Peter met me at the shop and within a half hour we were launching the boat. No sooner had we started floating when Peter hooked up! I looked up to see his rod was doubled over and following the fly line it was evident that he had firmly lodged his fly in a bush not fifteen feet from the put in. Oh well I guess you are allowed a mistake on your first couple of casts of the year! We floated through the first run fishless and under the watchful eyes a pair of Bald Eagles. If you have spent much time on the Bitterroot River in the winter you can't help but notice the unusual abundance of Bald Eagles. I think the reason you see more in the winter is because in the summer the Osprey chase them off. Osprey and bald Eagles are arch enemies due to the fact that Baldies always try to steal the Osprey's fish. It is amazing to watch one or more Osprey attack and dive bomb any Bald Eagle that tries to fly in the river bottom.

Winter fishing is much different than any other simply because the fish are stacked in long deep runs. So floating the Bitterroot now means you are just going from run to run and there is not much fishing in between. On the second run I stopped the boat above and told Peter to get out and work the long deep plunge pool. I have fished at least 20 times since the beginning of the year and knew there were at least four nice fish eager to eat in this run. As if on cue, Peter's strike indicator went down on one of his first casts and his rod doubled over. This time I knew there was no bush to catch his fly only a hungry trout. Just as I was about to grab the net, his strike indicator and two flies shot out of the water after being spit by the fish. Unfortunately this wasn't the last time this would happen in this run but he needed to dust the cobwebs off after a long winter.

At the entrance to the next run we were greeted by a flyby of an immature Golden Eagle. As the huge raptor flew off, Peter's indicator once again dipped below the surface. This time the fly stayed firmly in the fishes mouth. The fish took a couple of good runs for this time of the year and as it came to the net we could see that it was a healthy 17" Cutbow. We both were impressed by the depth of the fish. Almost all the fish I have been catching this winter have been really healthy. The last two years of great water conditions have kept this fish plump all year. Peter caught a small but healthy rainbow in the next run and offered to get on the oars. Even though it felt really good to be on the oars again, I accepted his offer and got in the hot seat.

After unsuccessfully dredging a couple of runs I finally hooked up and landed a decent cutbow. I proceeded to get back on the oars because after all this was Peter's last float. I told him we are going down the channel that led to the dam that had allegedly been removed. We both looked down the channel and Peter asked if I was sure we wanted to proceed. I have to admit it was super skinny looking down there and I knew I would be doing some dragging but I wanted to see if the damn dam was gone. After rounding the first corner I could see that the entire slick I had to go through was covered in ice. The ice looked really thin and with Peter out of the boat I though I could break through by rowing. However, Bella is not made to be an icebreaker and about halfway through the floe I got completely stuck! After a couple of tense moments while Peter was laughing his ass off at me, I stood up, punched the oars through the ice and backed off the ice. I then had to drag the boat by shore over the floe and through the next set of bends.

After the ice floe debacle, we were once again fishing on our way to the dam. The last run before the dam is some great holding water that runs along a car body bank. These were used in the old days for bank stabilization. Although we did not see any fish, we did see the first Bohemian Waxwings. Like the American Robin, these birds are harbingers of spring. Another thing we couldn't help but notice was the fact that the damn dam was still intact. Such is the Bitterroot rumor mill.

We pushed over the dam and between there and Tucker we landed a fish apiece. Peter had a very large Brown Trout one for a little bit. However, the fish just put the stick to him and there was not enough water and space in the run to keep the fish from running into a log jam. Soon after Peter landed a very healthy Westlope Cutthroat. All in all it was a great first day of floating and breaking ice on the Bitterroot River. Peter you will be missed this season and I wish you well in your Belgium endeavors.
Posted by Osprey Outfitters Fly Shop & Guide Service at 9:13 AM No comments:

Email ThisBlogThis!Share to TwitterShare to FacebookShare to Pinterest
Labels: Winter Fishing on the Bitterroot River and Skwala Hatch

February Fishing on the Bittterroot River 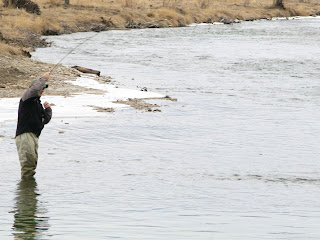 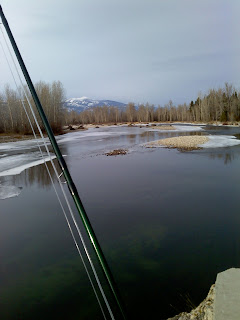 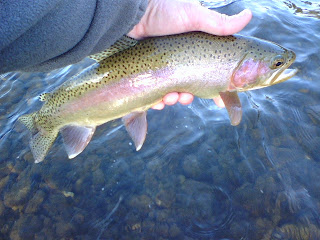 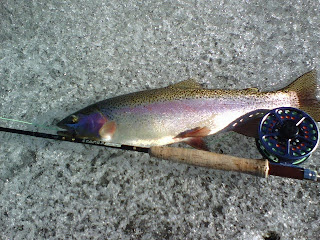 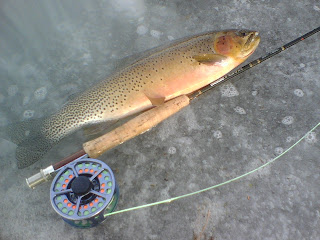 Well in trying to post some photos of the fishing we have been having in January and February, I accidentally deleted the original blog. Good ole computers! There is a good saying that I live by that goes, "Sometimes the best thing you can do with a computer is turn it off and go fishing!" Anyway, we continue to have some really good winter fishing conditions on the Bitterroot River. As a matter of fact, yesterday (Feb 12) was 50 degrees! Being that it got that warm, I had to venture down to the rio and check on the Skwala nymph migration and maybe exercise a trout or two.

After turning over a few rocks, it was obvious that the nymphs have begun their migration from the middle of the river to the banks. In one run, there were about 5-6 Skwala nymphs clinging to every rock I turned over. Now before you get too excited, we should not see any adults in earnest for at least three weeks. That being said I have seen years where we were fishing dries the first week of March. You can usually set your watch to the middle of March for fishing dry Skwaklas and the peak of the hatch is usually around the second week of April.

Now the question becomes how do you know when the adult Skwala will emerge? Unlike the nymph, which starts it's migration from the middle of the river according to light cycles, the adult gets it's cue from water temperature. As soon as the water temps start getting to the magic number of 40-42 degrees the adults will come out to play. During the Skwala hatch you will not seeing tremendous numbers of adults as you do during other stonefly hatches, i.e. Salmonflies, Golden stones, yellow sallies, etc. Unless you have a trained eye, chances are you will only see a few during the day. However, you can bet your ass that the trout see them and are stoked to have the equivalent of a T-bone steak floating down the river after eating breadcrumbs all winter!

Now that I have got you all wound of for fishing it is time to take a deep breath a re-read the above section on the hatch. That being said get ready because it is just around the corner and pray for more snow in the high country. I will leave it at that and will post another blog after this weekend regarding the state of our snow pack and the general health of the fishery currently on the Bitterroot River. Until then, have a great weekend and good fishn'!
Posted by Osprey Outfitters Fly Shop & Guide Service at 10:00 AM 2 comments: