Merry Christmas to all and may 2011 bring plenty of water, endless blanket hatches and a abundance of 20+ inch trout rising to your fly!
Posted by Osprey Outfitters Fly Shop & Guide Service at 11:20 AM No comments: 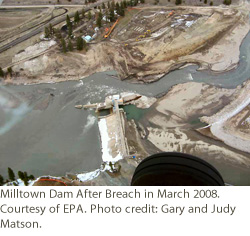 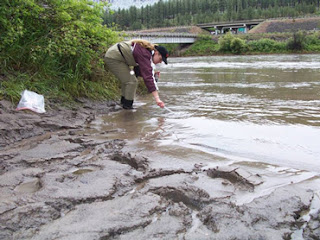 In recent years, the removal of dams have become a rallying cry for river coalitions around the country. The removal of Milltown Dam was on the front lines of this battle.  In 2008, the Milltown Dam was breached and for the first time in over a century the Clark's Fork river flowed freely.  However, when the dam was breached, it released more sediment than any other dam removal in U.S. history.  A study done by the University of Montana in 2008 found that sediments containing arsenic and copper were not only being deposited 50 kilometers further downstream but at 3 to 5 times the concentration than pre-breached levels.  It has been reported, that some of the sediment has traveled 100 miles downstream and settled behind the Thompson Falls Dam.  It became apparent during the fishing season of 2008 that the removal of the dam would have some drastically negative effects to the fishery.  Over the last few years, the mayfly hatches on the Clark's Fork have been a mere shadow of years past.  The Trico hatch, which once came off in blizzards, is now almost non-existent.  The same can be said for the Baetis.  Furthermore, where there once was clean cobblestone and pea-sized gravel, there are now sand bars of silt.  Another unintended consequence, was the fact that behind the Milltown Dam resided a very large population of Northern Pike.  There was always a population of pike below the dam, but since the removal of the dam the amount and size of pike being caught have both increased.  The fall in productivity of the Clark's Fork has also led to increased pressure on the Bitterroot River.  More and more Missoula anglers are fishing the Bitterroot while the Clark's Fork heals.

In 2009, Gov. Brian Schweitzer was one of the first and only people to float and fish the unobstructed Clark's Fork and Blackfoot intersection (the section remains closed to floating).  During that trip, it was reported that Gov. Schweitzer caught a 17" inch Westslope Cutthroat (According to the most recent article in the Missoulian newspaper, the fish story had grown and he allegedly caught a 22 incher.  I guess the governor is a true fisherman!)  The Milltown Dam project has been heralded as a environmental success story.  There is no question, that in the long-term, the removal of the dam will only benefit trout populations, not only on the Clark's Fork, but also the Blackfoot, the Little Blackfoot and all the tributaries located upstream of the old dam site.   FWP has already reported higher fish concentrations upstream of the old dam site. However, the negative effects on the Clark's Fork downstream of the old dam site will be felt for years to come.  Will the fishery ever truly recover?  Only time will tell.
Posted by Osprey Outfitters Fly Shop & Guide Service at 1:25 PM No comments:

How to Hold a Fish

I see it happen all the time.  A client presents the fly right, sets the hook and lands a trophy fish to perfection.  Then, when they want to memorialize the moment, they botch the hold of the fish and get a lousy photo. It may seem a trivial subject, but doesn't everyone want a great photo of the trophy they spent countless hours trying to catch?  Believe it or not, there is a right and wrong way to hold a fish to get that image.  There are other important factors, such as the fish's health and safety to consider as well.
﻿﻿
﻿﻿﻿The most common mistake people make holding a fish for a photo is they get their hands in the way.  When they lift the fish up, their hands are covering it and facing the camera.  To capture a good fish image, you want as little of your hands exposed as possible.  This is achieved by a few simple steps.  After the fish is in the net and the hook is removed, let it rest for awhile and get its' breath.  Then, gently turn the fish completely upside down.  This will put the fish into a semi-catatonic state and it will be less likely to go wild when you pick it up.  Now, slide your hands along its side closest to you and put your fingers under its belly and pick the fish up.  Now, the less you squeeze it, the less likely it is to go crazy and the less likely you are to harm it (more on that later).  To get a good photo, you will want to bring the fish up to your chest.  Try not to be tempted to hold the fish as far as you can from your body.  This is an old trick to make the fish look bigger than it really is.  If you are taking a photo of a trophy fish, the photo (as long as it is taken properly) will do the fish justice without any trickery.  I usually try to keep my arms bent and the fish as close to my body as possible.  Also, make sure a net is under the fish while you are taking the photo.  If the fish does flop, it will fall safely back in the net.  This, not only saves the fish from getting away in an untimely fashion, but also prevents it from landing on the ground, rocks or the bottom of the boat.

Now that we have got the logistics of a good photo out of the way, there are some safety concerns that should be addressed before you handle of a fish.  Fish have a slime coating on their skin that protects them from parasites and diseases.  Most guides use rubber nets instead of the old mesh ones.  This is due to the fact that the rubber nets are much less likely to remove the slime coating.  Also, if you are planning on handling a fish you MUST first get your hands wet.  If you handle a fish with dry hands, you will remove some of this slime coating.  The more slime coating the fish loses, the more likely it will contract a skin borne disease or parasite.  Once you have the fish calmed down (in a catatonic state), lightly cradle the fish in your hands and avoid putting a death squeeze on the fish.  Fish live in a very low gravity environment and their body structure cannot handle a lot of outside pressure.  Gently lift the fish up, snap a photo and place it back into the net and water.  I tell my clients that the fish can be out of the water as long as you can hold your breath.  Once you can no longer hold your breath, the fish goes back in the water to catch its breath.  Larger fish are more susceptible to oxygen deprivation, so it is best not to keep them out of the water for long periods.  Once you have your photo, place the fish back in the net and let them recover before releasing.  A fish uses the dissolved oxygen in the water to release the lactic acid out of its muscles that is built up from the fight.  If the water temps are in the upper 60's, it is probably best you do not take the fish out of the water or handle it.  As the water temperature goes up the amount of dissolved oxygen goes down.  During these times, handling and removing the fish from the water could be too much for the fish to recover, especially for the larger fish.  When reviving a fish, simply face the fish upstream so the water flows through its gills.  When it is ready, it will swim off.  DO NOT rock the fish back and forth.  This will force water through the back of its gills and can potentially suffocate the fish.  Everyone, including me, wants a great photo of that one that didn't get away.  If you follow these easy steps you should have that shot and the fish will live to fight another day.
Posted by Osprey Outfitters Fly Shop & Guide Service at 4:13 PM No comments: