Nymphing 'Em Up During a Blizzard Caddis Hatch! 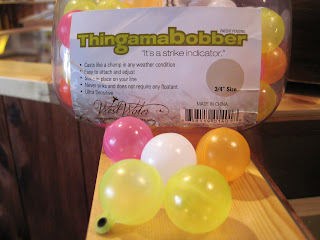 For those of you that know me, prepare to be shocked! This weekend we saw some explosive fishing during the Mother's Day caddis hatch on the Bitterroot River. However, almost every nice fish ate a stonefly nymph fished about five feet down. I am not the biggest fan of nymphing but you cannot argue with results. The caddis hatch on the Bitterroot River is a weird time. People will tell you they have epic days on the Bitterroot during this hatch, but I beg to differ. If you want to catch a bunch of small fish, then by all means throw a caddis dry. I was on the river all day Saturday and Sunday and saw maybe four real fish eat a caddis. I have found that for some reason the larger fish on the Bitterroot River tend to ignore caddis adults. People have asked me why on almost all other Western rivers the caddis is a very important food source for trout but not so much on the Bitterroot River. I believe there are a few reasons for this unique feeding activity. First of all, the Bitterroot River contains 64 different type of stoneflies! During the Mother's Day caddis hatch and even summertime hatches there is always a stonefly (either adult or nymph) for our fish to choose from. These are much easier and meatier targets for large trout. Therefore, they do not have to spend as much energy sipping a much larger stonefly that is prone on the water versus a caddis that is bouncing all over the place as it lays it's eggs. Furthermore, in the spring (and summer and fall for that matter) when the caddis are out there are also multiple types of mayflies on the water as well. Just like the massive variety of stoneflies, the Bitterroot River has almost every type of Western mayfly. Once again, a floating mayfly dun or spinner is a much easier target for a hungry trout than a bouncing caddis.

With all this being said, this weekend we decided to throw a stonefly nymph almost all day on both days. Yes, I said we threw a nymph all day and yes I am feeling well! Saturday, a buddy of mine was back in town for the weekend so we decided to hit the rio. The day before he had wade fished and "absolutely crushed 'em" on dry flies. 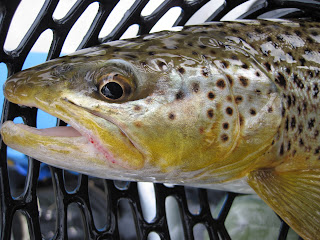 However, on Saturday he must have either angered the fish Gods, spent all his good luck the day before or maybe it was just karma for calling me every ten minutes the previous day telling me his triumphs as I sat in the shop, he could not land a fish to save his life on Sunday. He must have locked into at least 20 fish and only landed a few. I won't mention his name but when you hear me say, "You Robbed 'em", maybe you will figure it out. The best fish of the day was a nice tail out Brown, that when it jumped the first time, I thought would be in the 20" class but turned out to be 18 1/2". This wily adversary fell victim to a Freddy in the deadest of dead water. Freddy, you da man! 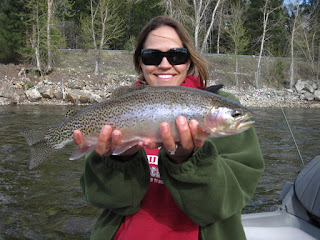 Sunday, being Mother's Day, I took my beautiful wife out. After the day previous, I was hoping she could get good juju back on Bella (my boat's name)! Only minutes into the float, she landed a nice 14" Weslope cutthroat; yes on a nymph. She proceeded to absolutely crush fish after fish, most of which came to the boat. Jenna brought over 20 fish to the boat on Sunday and definitely got some good juju back on Bella. The biggest fish she landed was an 18 1/2" Cutbow that absolutely exploded when she set the hook. The fish jumped two times and gave two smoking hot runs that made her reel sing! 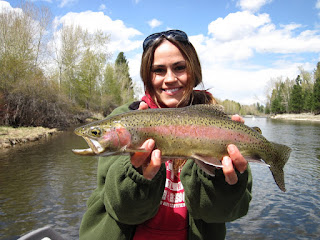 Unfortunately, she Robbed a nice big brown and a VERY large trout at the end of the float. You can’t win them all! It was a great day for Jenna to get out and enjoy all the Bitterroot River has to offer. That night she had a smile ear to ear as she massaged her battle worn arm.
Posted by Osprey Outfitters Fly Shop & Guide Service at 11:36 AM No comments:

A New Pod Cast Fishing Report is Up

You better get out there while you still can. Runoff is right around the corner!

http://explorethebitterroot.com/bitterroot-river-still-fishing-well
Posted by Osprey Outfitters Fly Shop & Guide Service at 8:52 AM No comments: