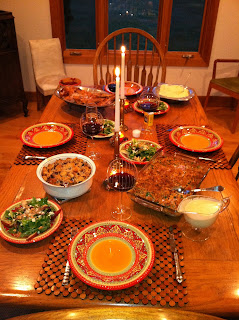 My fishing buddy Donn and I were sitting on the couch adjusting our belts to allow room for a unbelievable Thanksgiving feast to settle.  Inevitably the conversation switched to upcoming fishing opportunities.  Late fall and the winter months are when I get to do most of my fishing.  From March to late October I'm so busy guiding and running the shop,  I rarely fish more than a couple times a month.  Anytime the weather is halfway decent in the winter I hit the river.  We quickly checked the forecast and saw that the Monday after Thanksgiving was promising; forecasted temperatures in the mid 50's and partly cloudy.  All that was left to do was sit back, digest and hope the weatherman got it right. 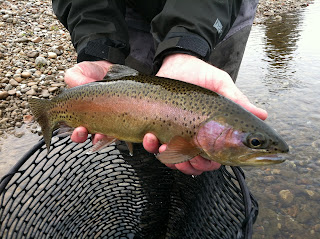 I walked outside that Monday and it felt as though the weatherman rolled the right dice.  There are firsts for everything!  The overnight lows had only dipped to 35º and the mercury was rapidly rising to the predicted mid 50's.  Perfect for some late fall fishing.  Hell, I was sure we'd even have some  dry fly opportunities.  To say the least, from mid-November to late February the dry fly action is spotty.  We're mostly relegated to watching a bobber or maybe an eat or two a day on a streamer.  At the boat ramp I didn't notice any bugs yet so we rigged a nymph rig and a streamer rod.  What was VERY noticeable, was the lack of other anglers.  If you are brave enough to face winter fishing conditions the biggest reward is having the river to yourself.  No sooner had we gone 400 yards from the boat ramp when my rod was doubled over.  The 18" hybrid had succumb to a stonefly nymph.  Even though the water temps were hovering in the upper 30's, the buck gave a great fight.  He even tried to go airborne but only was only able to clear half his body from the surface.  As we moved down the river we brought a few more up on nymphs.  On one of my favorite runs, in that particular stretch, we were treated to 5 fish on dries.  Even though that is incredible in itself for the time of year, this is not the focus of the story. 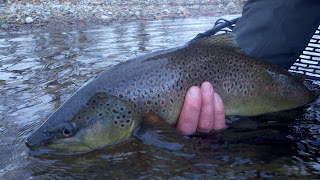 After being satisfied by catching some fish on dries, Donn immediately turned to the streamer rod.  He refuses to nymph and will only throw streamers in the winter.  They aren't nearly as productive as a nymphs, but there's always that opportunity for a trophy.  He fishes streamers in the Kelly Galloup fashion; type 3 sinking line and light, articulated patterns. We covered several miles of water without even a chase.  However, we did have a few false hookup's on rocks and sticks.  We entered a long, deep run and suddenly Donn's rod doubled over.  For an instant I thought he had caught another rock.  Fortunately, I was proven wrong as the rod bounced and line peeled off his reel.  Immediately I knew we had a VERY special fish.  As we began to fight it everything slowed down and became very quite.  At first the fish put his head down and bulldogged Donn.  This is the moment when fishing from a boat becomes a team sport.  If I were to let the boat be pulled down river by the current too much line would come off the reel.  This would make it extremely difficult for him (or any angler) to control the fish and also a good chance of losing it.  I struggled to hold the boat stationary as the fish held its ground (or I should say water).  After a what seemed like an eternity, Donn was able to turn the fish's head and we slowly headed downstream.  As he fought to gain line he applied opposite pressure to the fish.  This is crucial in battling big fish.  If the fish heads right you need to pull left with the rod, and vice versa.  After about 200 yards, I spotted a soft inside run perfect for landing a fish.  Although we both knew it was a monster neither Donn nor I, at this point, had seen the fish.  As I eased into the softer water the fish was still about 20 feet upstream of us.  Before he could coax the fish any closer, with a thunderous report,  my oar blade hit the bottom.  The fish although tiring, in a blink of an eye, rocketed out of the shallows and shot 100 feet upstream.  With line screaming off his reel I pulled on the oars as hard as possible.  Not only did I need to get the boat out off the bank, but as far upstream as possible.  As soon as I got the boat in motion the wily beast spun 180º and charged downstream.  I looked up at Donn's rod to see nothing; no bend and only slack, piled up line.  As the fish raced past us, I got a good look at just how big it was.  I felt like Sgt. Brody in the movie Jaws when the shark swims alongside the boat.  With all the slack line I was sure it would be the last time I would see this particular fish.  Fortunately, the fish gods were smiling.  After what seemed like a lifetime  Donn regained pressure on the beast.  I quickly spun the bow of the boat downstream and began furiously oaring.  We fought the fish for another 200 yards until I spotted another soft inside run.  After some very tense moments, including when the fish swam completely under the boat while it was beached, we finally had the 24", 5 plus pound male brown trout in the net.  On the Bitterroot River, this fish was, and still is, one of the biggest trout that has graced my net.  I have seen bigger fish but they always have found a way to escape the net.  My personal best is 23".  On shore we relived the battle over a few celebratory beers .  A great story for sure, but this only two-thirds of the journey.


Fast forward six days.  We saw another weather window open and decided to float the same section.  The fishing was good, but not as productive as the week before.  We nymphed up a few but none on dries.  About a mile upstream from where Donn had caught his beast, I switched over to the streamer rod.  It just so happened to have the same streamer attached as six days prior.  As we entered the run where we caught the brown, I was just about to say,  "There is no way I'm gonna catch a fish, let alone your brownie".  But before I could say anything, the rod was nearly yanked from my hand!  I looked at him in utter disbelief.  I said, "There's NO WAY this is your fish."  Just then the fish turned downstream as my reel screamed to life.  In an instant, 75 feet of line had been peeled off.  It was deja vu all over again.  Like I did the week before, Donn eased the boat into the first patch of soft water.  However, instead of holding it's ground, this fish decided to continue running downstream.  Donn was quick to get us back in the current and we were off to the races.  He soon caught up and we began looking at the next, very familiar, soft inside to land the fish.  At this point we both saw the fish and knew it wasn't the same brown trout.  Although, it was a very nice fish.  After beaching the boat in the EXACT same spot we were six days prior, a beautiful 20" hybrid male came to the net.  In all my years of guiding and fishing the Bitterroot River, I have NEVER seen two fish over 20" come out of the same run, with the same exact fly, and landed in the same EXACT spot.  We marveled over what had just happened over several beers, each tasting better than the one before.  Before leaving we named the run "Twenty or Better".  Neither of us fished the rest of the way to the take out.  However, we did laugh and marvel at our luck the whole way home.
Posted by Osprey Outfitters Fly Shop & Guide Service at 6:25 PM